So, "Google Chrome Just Passed Internet Explorer To Become The World's Most Popular Web Browser". What does that mean for security?
I think that, putting aside the always present concerns around privacy every time the name "Google" is around, it's good to have a browser with security conscious design being widely adopted. However, I think the interesting part of this is to consider the data below together with some other factors: 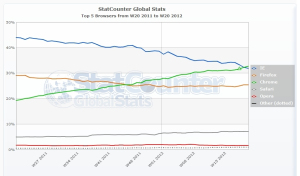 Source: StatCounter Global Stats - Browser Market Share
Have you noticed that browser vulnerabilities are not the key vectors being used by attackers to compromise end users anymore? The culprits of the day are Adobe Flash and Acrobat Reader. And it's easy to understand why.
If we look at the graph above we'll notice there's no browser with more than 40% of the market. So if you are an attacker and you want to write malware than hit a bigger chunk of the "victim space" it's not a good strategy to use browser specific exploits, such as those related to MS12-010. Wouldn't it be better to target something that runs on 99% of the PCs (considering that PCs are still the major malware target), or even 73%? Those are Adobe Flash and Java, respectively.
Whenever there's monoculture, there is increased security risk, as Dan Geer has been saying for years:


In biology, a monoculture--a singular species that supplants all others--is a bad thing. When every plant is the same species, every plant is susceptible to the same predators, the same diseases. Examples are as plentiful as they are sad: Consider the virus that brought on the Irish potato famine or the boll weevil that nearly obliterated the South's cotton crop in the early 20th century, and you see the destruction that human-made monocultures bring upon themselves.
Computers are no different. Computer viruses spread efficiently, lethally when all computers on a network run the same software. MyDoom, Melissa and MSBlast were a function not of the Internet, but of a Windows monoculture. They caused havoc because they were designed for specific vulnerabilities of Windows. Since one virus generally affects one species of software, any computing monoculture poses a hazard the same way it does in nature.

As always, the old is new again. Geer was talking about document formats at that time, now the discussion is around active web content. But there is hope: HTML5 has been seen as something that will allow the diversification necessary to reduce the risk. No more single piece of software necessary to browse the web, no dependence on specific Operating Systems or platforms.
But for this specific case, there is a catch: HTML5 is so powerful that there's a risk it becomes not only an attack vector, but a new species by itself, a huge new monoculture. Things like the WebSocket API could make it be the new One, the One to rule them all, the One to bring them all and in the darkness bind them (Yes! I did it! I quoted Lord of the Rings :-)). Cross-platform malware is the new threat rising, leveraging HTML5 features to exploit PC, Mac, iOS and Android.
The perspective (temptation?) of malware that can potentially run on all those platforms is certainly drawing the attention of all sorts of colored hats. Javascript worms have been reality for a long time, so there's really no reason to believe HTML5 malware won't be a rising issue in the near future. Trend Micro's Robert McArdle wrote a very nice piece about HTML5 attack scenarios that illustrates our future challenges around it.
So be it. The browser monoculture is dead (at least for now - keep an eye on Chrome's rising trend!). Long live HTML5 monoculture!

Posted by Augusto Barros at 11:48 AM
Email ThisBlogThis!Share to TwitterShare to FacebookShare to Pinterest